Need to know how to enroll in a course? Want to remember what courses you took in previous years? Want a record of PD for yourself? View the PCCS Canvas Catalog Guide to get all your catalog questions answered!

What is Grammarly?
Grammarly is a Chrome browser extension that reviews spelling, grammar, punctuation, clarity, engagement, and delivery mistakes in English texts. It detects plagiarism and suggests replacements for the identified errors. It also allows users to customize their style, tone, and context-specific language.
Why do students now have to install it Manually?
Previously the district was able to force install this extension for students to allow ease of access. However, it was interfering with spell check in Google docs causing issues for staff and students. Now, when students install Grammarly manually they can toggle the extension on or off so it will no longer interfere with Google docs’ internal spell check features.
How to Download the Grammarly Browser Extension

Below is a direct link to where the Grammarly extension can be installed.

How to Turn off the Grammarly browser extension

If you have any questions or concerns, please contact the technology department by submitting a service ticket.

Kids are naturally curious. They ask why and how? They imagine. They create. When kids create, they solve problems and think up new solutions. Young creatives need to be nurtured, so that their originality shines. So their ideas can take shape and become real. When we celebrate their innate creative mindsets, children view the world with wonder. They embrace innovative thinking. They create possibilities. Join Crayola Creativity Week, and help children create the future.

Check out the full calendar of events here!

For those of you about to begin a well deserved two week winter break, which we hope will be all you hope for and a bit more, on THURSDAY before you leave (and possibly, if need be, again on Friday)….

WOULD YOU PLEASE SECURE ALL VALUABLES in the classrooms and office spaces you inhabit. This includes laptops, document cameras, Apple TVs, remotes, and interactive pens.

Further, would you please make sure all iPads and ChromeBooks are in their carts and those CARTS ARE LOCKED and plugged in before leaving.

Finally, would you please also POWER OFF any of the following equipment, if it is equipment you handle:

THANK YOU for your cooperation. 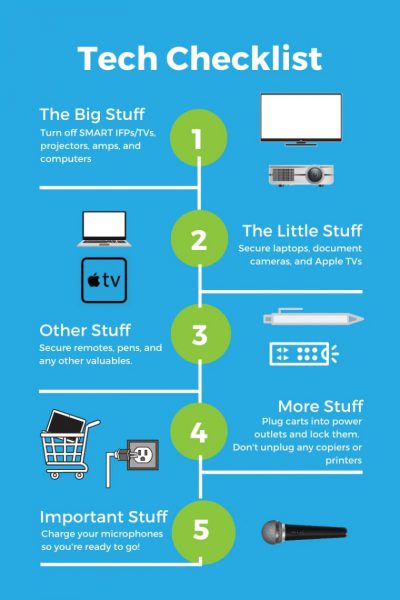 Grammarly is a Chrome browser extension that reviews spelling, grammar, punctuation, clarity, engagement, and delivery mistakes in English texts. It detects plagiarism and suggests replacements for the identified errors. It also allows users to customize their style, tone, and context-specific language.

The Grammarly Chrome extension has been force installed on student Google accounts for the past several years, however, it recently started creating an issue with the built-in spell check feature in Google Docs. Its interference with Google’s native spell checker means that when students or staff are using Google Docs and words are misspelled, these mispellings aren’t identified with a red underline. While Google’s spell checker can still be used, the lack of underlining requires you to launch it by depressing Ctrl+Alt+X and using the arrow keys to cycle through words of concern.

After the extension has been reinstalled, users will be able to use it as they have in the past, but also will be able to disable it when desired, such as when using Google Docs.

If you have any questions or concerns, please contact the technology department by submitting a service ticket.

Below are some websites built for teachers that offer usable classroom clips.

Classhook: Search for clips from popular movies and TV shows by grade level and clip length. Or browse by subject to find something to fit your needs. Their free plan includes up to 20 ad-free clips per month with an embedded question as well as access to discussion starter templates.

The Kids Should See This: Self-described as “smart videos for curious minds of all ages.”

The Literacy Shed: This site has video clips and lesson ideas, including many of the Disney shorts.

ChatGPT by OpenAI (link blocked on our network) was recently released and has taken social media by storm. ChatGPT is a technology that is powered by AI (Artificial Intelligence).

What is unique about this technology is the AI can answer a multitude of questions with original responses that cannot be checked by modern plagiarism checkers. The writing is so advanced that these platforms (such as Google’s Originality Reports and Turnitin) see it as original work. There are springing up detectors such as this one that can be used to analyze and rate on a scale how likely a block of text was AI-generated, but they are far from 100% accurate.

See for example this article and look at the example below gathered from this article: https://www.springboard.com/blog/news/chatgpt-revolution/ 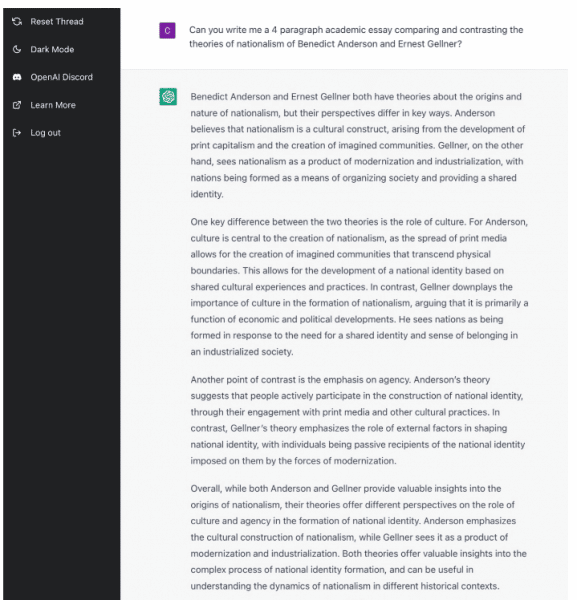 Technology disrupting the education field is nothing new. When the PhotoMath app – Video, came out a couple of years ago, it too made an impact. The fact that a student could simply take a picture of a math problem and the app could not only give an immediate answer, but then show the steps it takes to solve the problem.

Below are some tips and tricks that we recommend to teachers to help:

While the district has blocked ChatGPT on its network, this tool still can be accessed at home or on cell phones by students.

Lately, we have received a few tickets about blocked websites. Please keep in mind that certain websites may not be blocked for teachers, yet are blocked for students. As far in advance as possible before starting a lesson with students that involves an online activity, please confirm that a student can successfully get to the website and the activities you hope to use with them on the site. If the site/video/activity is blocked you can submit a tech ticket to request that it be unblocked. Keep in mind that we have different access permissions set at our three grade levels – elementary, middle and high – and you should confirm with an account of the same level as your expected lesson audience. So for example, if you teach middle school students, but have an elementary student at home, testing a site on their account may not be an accurate picture of access for your middle schoolers. 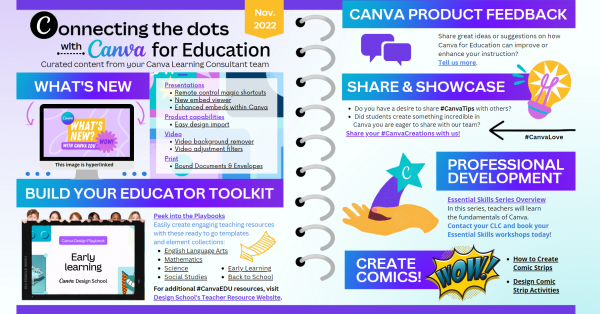 Check out the November edition of Connecting the Dots with Canva for Education. In it you’ll find awesome features like the video background remover, comic strip templates, and design playbooks for subject areas.

We hope you enjoy your Thanksgiving break! Before you leave Tuesday afternoon…

WOULD YOU PLEASE SECURE ALL VALUABLES in the classrooms and office spaces you inhabit. This includes laptops, document cameras, Apple TVs, remotes, and interactive pens.

Further, if it is equipment you handle, would you please make sure all iPads and Chromebooks are in their carts and those CARTS ARE LOCKED and plugged in before leaving.

Finally, would you please also POWER OFF any of the following equipment, if it is equipment you handle:

THANK YOU for your cooperation.